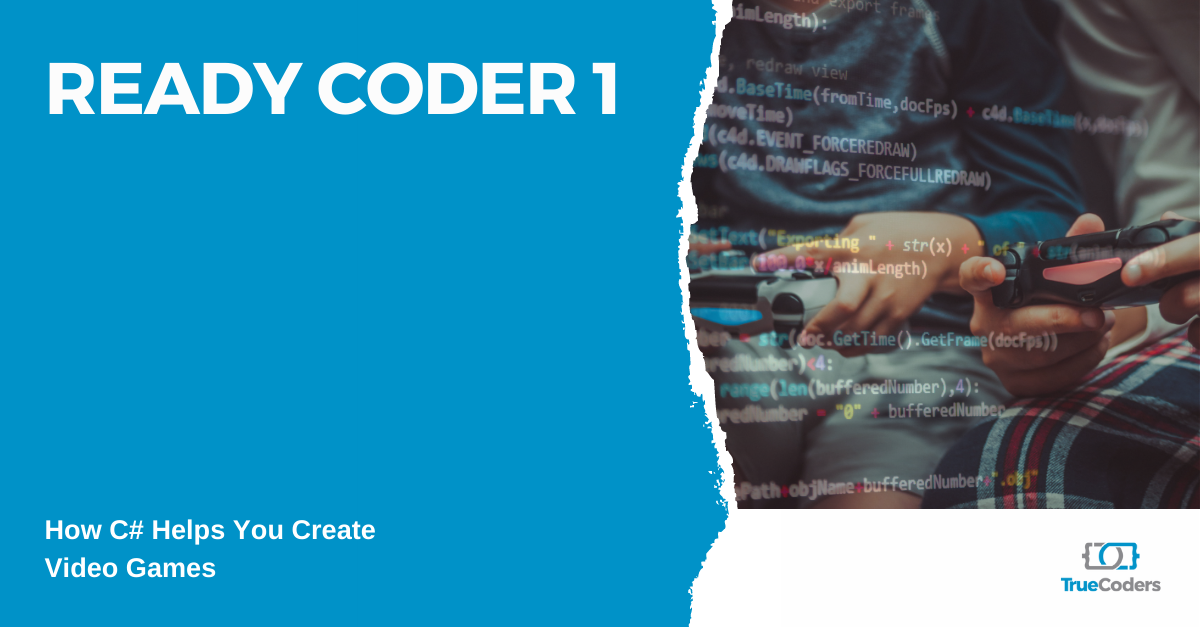 Coding is a rules-based discipline. So, the first things that come to mind when you think of “coding-based products” might be... boring. Things like banking apps, email newsletters, online shopping sites, etcetera.

It's easy to gloss over the fact that coding – and coders – are the foundation for one of the most popular forms of entertainment: video games.

Video games are fun, fluid, and wildly varied pieces of art – but under the surface, you'll find the order and logic of code.

Code you can learn to write...

C# and the Language of Games

C# was created by Microsoft in 2000 and is used by companies in a wide range of software products, including video games. C# is the primary coding language you'll learn at TrueCoders.

C# is a "statically typed" language. “Variables” (values that can change) need a “type” (instructions on how the variable will be used) associated with them when you write code in C#.

Other languages, like Python or JavaScript, are "dynamically typed." The interpreters for these dynamically-typed languages determine the variable type when they run the code. In C#, variable type is interpreted as it is typed it out. This means you will know if you have errors before you run the code, and the "compiler" will point them out.

(check out our article on C# for more info.)

Unity is a game engine created with C#. Game engines govern how aspects like physics systems and rendering work in games run through that specific engine. Many games that run on Unity use C# as their own coding language during development.

Unity is a popular engine for a variety of reasons. It's hailed as one of the easier engines for beginners to create with, which pairs well with C#, a language known for a comfortable learning curve. (C# isn't the only language you can use to create a game through Unity, but it is a solid option.)

Unity is also flexible enough to run a variety of game styles. Unity might not be as powerful as Unreal Engine 5, but you can use Unity to create whatever you can think of – 2D, 3D, augmented reality, VR, you name it.

For these reasons, Unity is popular with indie developer teams and lone game devs around the world.

Thanks to C# and Unity, game development is in the hands of more people than ever before. That means unique titles are always coming out. Here are a few of the games you might have heard of:

All of these super-successful, award-winning games exist thanks to Unity and/or C# – and the coders working their magic behind the scenes, of course.

That side-scroller or RPG rattling around in your head? That digital card game you've blocked out on paper? That indie game-changer you're dying to create?

Those ideas aren't pipedreams – they're just dreams-in-waiting. All you need is TrueCoders and nine weeks of learning. After that, your skills will do the rest.

Give us a call. TrueCoders is the game changer that can help you go from gamer to game developer.

Back to Blogs
View Courses

Ready to change your life?